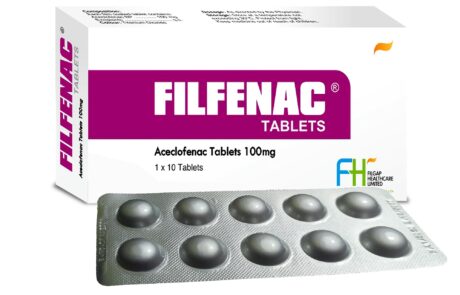 Aceclofenac is a non-steroidal agent with marked anti-inflammatory and analgesic properties.

Aceclofenac film-coated tablets are supplied for oral administration and should be swallowed whole with sufficient quantity of liquid.

To be taken preferably with or after food. When Aceclofenac was administered to fasting and fed healthy volunteers only the rate and not the extent of Aceclofenac absorption was affected.

Undesirable effects may be minimized by using the lowest effective dose for the shortest duration necessary to control symptoms.

The recommended dose is 200 mg daily, taken as two separate 100 mg doses, one tablet in the morning and one in the evening.

There are no clinical data on the use of Aceclofenac in children and therefore it is not recommended for use in children under 18 years of age.

The elderly, who are more likely to be suffering from impaired renal, cardiovascular or hepatic function and receiving concomitant medication, are at increased risk of serious consequences of adverse reactions. If an NSAID is considered necessary, the lowest effective dose should be used and for the shortest possible duration. The patient should be monitored regularly for GI bleeding during NSAID therapy.

The pharmacokinetics of Aceclofenac is not altered in elderly patients, therefore it is not considered necessary to modify the dose or dose frequency.

Hypersensitivity to Aceclofenac or to any of the excipients.

NSAIDS are contraindicated in patients who have previously shown hypersensitivity reactions (e.g. Asthma, rhinitis, angioedema or urticaria) in response to ibuprofen, aspirin, or other non-steroidal anti-inflammatory drugs.

Aceclofenac should not be prescribed during pregnancy, especially during the last trimester of pregnancy, unless there are compelling reasons for doing so. The lowest effective dosage should be used

Store at a temperature not exceeding 30° C. Protect from light.

Keep medicine out of reach of children.